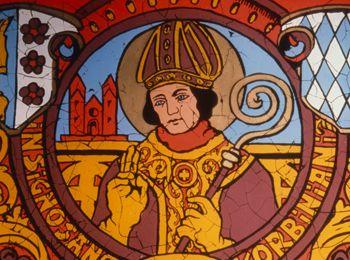 Corbinian is not only presumed to be the founding figure of the diocese of Freising, but has been venerated as the patron saint of Freising to this day. So, who is this saint and how do we know so much about his work and history?

Just a few decades after his death Bishop Arbeo of Freising (765-783), considered to be the first writer of Old Bavaria, dedicated a saint biography to him and this biography serves today as a valuable source of the spiritual, cultural and political history of Europe.

In the eighth century, Bavaria was a culturally open country. On the one hand, the ducal family of the Agilolfings was loosely connected to the Merovingian Empire in the west, but was also in close contact with its neighbors in the south, the Lombards.

Korbinian originated from the Kingdom of the Franks

Korbinian originated from the Kingdom of the Franks and was deemed to be a prominent representative of Iro-Frankish monasticism. It is believed he came from the upper class, suggested by his pronounced self-confidence and the ease with which he dealt with the great names of his time.

In the year 715, he embarked on a pilgrimage to Rome with his disciples to visit the tombs of the apostles, intending to remain in Rome and lead a holy and monastic life.  Pope Gregory II (715-731), however, is said to have bestowed a missionary assignment on him. He travelled to Rome a second time, but the pope sent him back over the Alps. He settled down in Kuens near Merano, which at that time belonged to Bavaria. Kuens was also near the tomb of Saint Valentine and Saint Zeno, whom he greatly venerated. The Bavarian Duke Grimoald summoned him to Freising as a holy man had bestowed a sacred legitimacy on the duke. The relationship between Korbinian and the ducal family, however, deteriorated to such an extent that Korbinian withdrew to the neighboring mountain at Weihenstephan and founded a spiritual community there that is considered the primal cell of monastic life in Freising. The conflict with the ducal family escalated with the duchess planning to assassinate Korbinian. This plan, however, failed. Korbinian left Freising under the cover of darkness and returned to Kuens. After four years, Grimoald´s nephew, Duke Hucbert, called the holy man back to Freising and is said to have even given him his Freising palace as a residence.

Korbinian's relics lie in the Cathedral of Freising

But Korbinian must have passed away shortly after and was buried in Kuens near Saint Valentine in accordance with his wishes. During the time of Duke Tassilo III (748-788), the saint´s body was brought back to Freising. This translatio can probably be attributed to Bishop Arbeo because the patrocinium “sancti Korbiniani“ for Saint Mary´s Church can be traced back to as far as 769.   His relics have been in the Korbinian Shrine in Freising Cathedral since the 19th century and he still plays an eminent role as a diocese saint today.

According to legend, one of Korbinian´s pack animals is said to have been torn by a bear on its way over the Alps. Korbinian´s authority and charisma appeared to have impressed the wild animal to such an extent that it allowed itself to be tamed by the saint and henceforth carried his belongings. Ever since, the saint has been depicted with a bear carrying a bundle on his back. Today, this bear not only features in the coat of arms of the city of Freising, but can also be found in the coat of arms of Pope Emeritus Benedict XVI, archbishop of the diocese of Munich-Freising from 1977 to 1982.

November 20 is Korbinian´s memorial day in both Catholic and Orthodox Churches and every year, a big festival is held in his honor in Freising.