Weihenstephan's Beers amongst the Winners: A Shower of Medals at the Australian International Beer Awards

Great success at the AIBA 2021: Several Weihenstephan beers have been awarded medals at the Australian International Beer Awards. 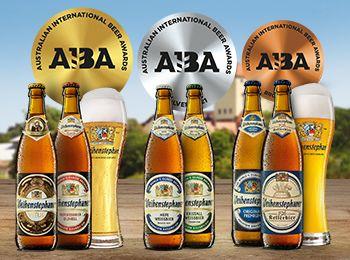 2020 was a year full of uncertainty with events cancelled here, there and everywhere, including the Australian International Beer Awards (AIBA). At this event, the best beers worldwide are normally awarded, but unfortunately not last year. Breweries from around the world were all the more elated that the competition could take place this year once again. The winners were announced in a special award ceremony on 20 May.

And almost like a tradition, these winners included numerable beers brewed at the Bavarian State Brewery Weihenstephan. The Hefeweißbier Dunkel (bottle), the Kristallweißbier (keg) and the Weizenbock Vitus (bottle) were each awarded a gold medal. The jury was convinced by our beers, resulting in all three being among the winners in the "Best Wheat Beer" category. Additional beer specialties from Weihenstephan did not leave the competition empty-handed: silver went to the Hefeweißbier and once again to the Kristallweißbier (both bottle). Two bronze medals were awarded to the Original Helle (bottle and keg) as well as to the Kellerbier 1516 (bottle) and the Hefeweißbier (keg). A real shower of medals for the Weihenstephan brewery!

"After one and a half absolutely exceptional years, we are of course all the more delighted by these awards", Prof. Dr. Josef Schrädler, Director of the Bavarian State Brewery Weihenstephan explains. "It shows that our beers are of the highest quality and that they are recognised as such all over the world." Tobias Zollo, First Master Brewer, is also thrilled: "Everyone at the Weihenstephan brewery works hard every day to be able to deliver great beers to our fans and friends around the globe. We are very happy that this is appreciated!"

If you wish to learn more about our winners, you will find additional information at www.weihenstephaner.de. A lot more information and exciting stories are included in our brand new Weihenstephan podcast "1000 Years of Beer", available on Spotify, Google Podcasts and many other platforms.